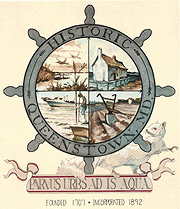 Queenstown was the home of the first County seat in 1707, and in 1708 the original Courthouse was built. The County seat remained here from 1707-1782, at which time it was moved to Centreville.

Today, agriculture and seafood harvesting are the dominant economic factors in our area. Retail shopping outlets, located in Queenstown, and the Queenstown Harbor Golf Links, adjacent to the Town, are thriving and bring many visitors to the Town.